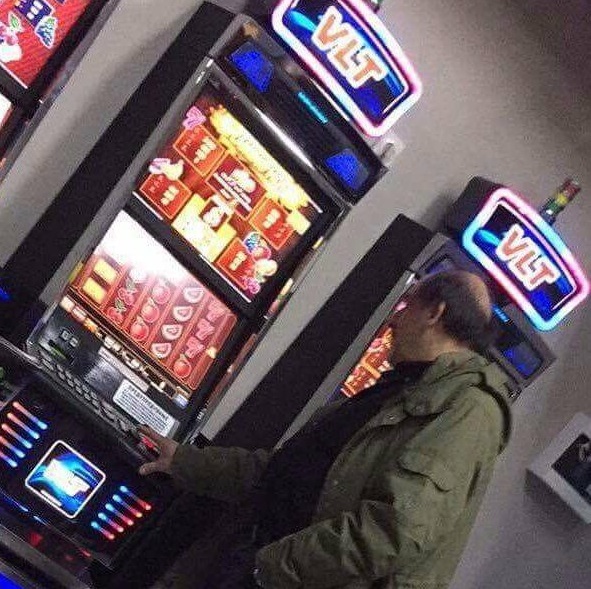 After the appointment by the Government of the former MP, Minister and Deputy Minister Samka Ibraimovski for acting Deputy Director of "Makedonija Pat", Zoran Dimov, owner and founder of TV BTR Nacional, announced that the PCER party has been blocked for a long time due to the party's debt to BTR Nacional, for unpaid and implemented paid political program - Campaign.
The debt dates back more than 5 years, due to which the claims are given through a court for execution. To this day, that debt has not been repaid, which amounts to about 1 million denars.
Dimov has repeatedly allowed PCER to unblock the account in writing with a request due to the inflow of funds and the functioning of the party, with a promise from Samka that he will start paying the debt. After the money went to bed, Samka did not keep his promise and the account was blocked again. However, Ibraimovski several times due to the inflow of funds for the party opened special accounts for laundering those funds and according to Dimov without knowing the party where he is a signatory of those accounts raised the funds and thus committed illegal acts. Former Minister without portfolio Aksel Ahmedovski, who knows all these moments, is also aware of this fact.
Dimov repeatedly warned them from SDSM that PCER's account is blocked and that Ibraimovski illegally collects funds for a special sub-account of the party of which he is the only signatory.
Dimov says: "Ibraimovski ruined and set back the first Roma political party in Macedonia. Instead of progress, he took the party back years. When he took over the presidency, he only degraded it and used it for personal interests. For him, it was in fact a business firm - for his own personal interests, not a party that should defend the interests of the community he should represent. That is why the PCER party collapsed financially. Now is the time, as soon as he takes a seat on behalf of the party, to repay his debt to TV BTR from his salary as acting deputy director of "Makedonija Pat" to get rid of PCER's account, so that this party can function normally. At the same time, he knows that he is already undesirable on the Roma political scene, let him slowly give way to other much more productive and young forces in PCER. "PCER needs to remove this" gravedigger "of the party from its ranks and elect a new and young staff "Otherwise, the future leader of PCER should know that he will encounter a blocked account of PCER, but I promise that I will make an effort on my part to wholeheartedly help this party and find an optimal solution only for the benefit of PCER and for The Roma people "concluded Dimov in his thinking. 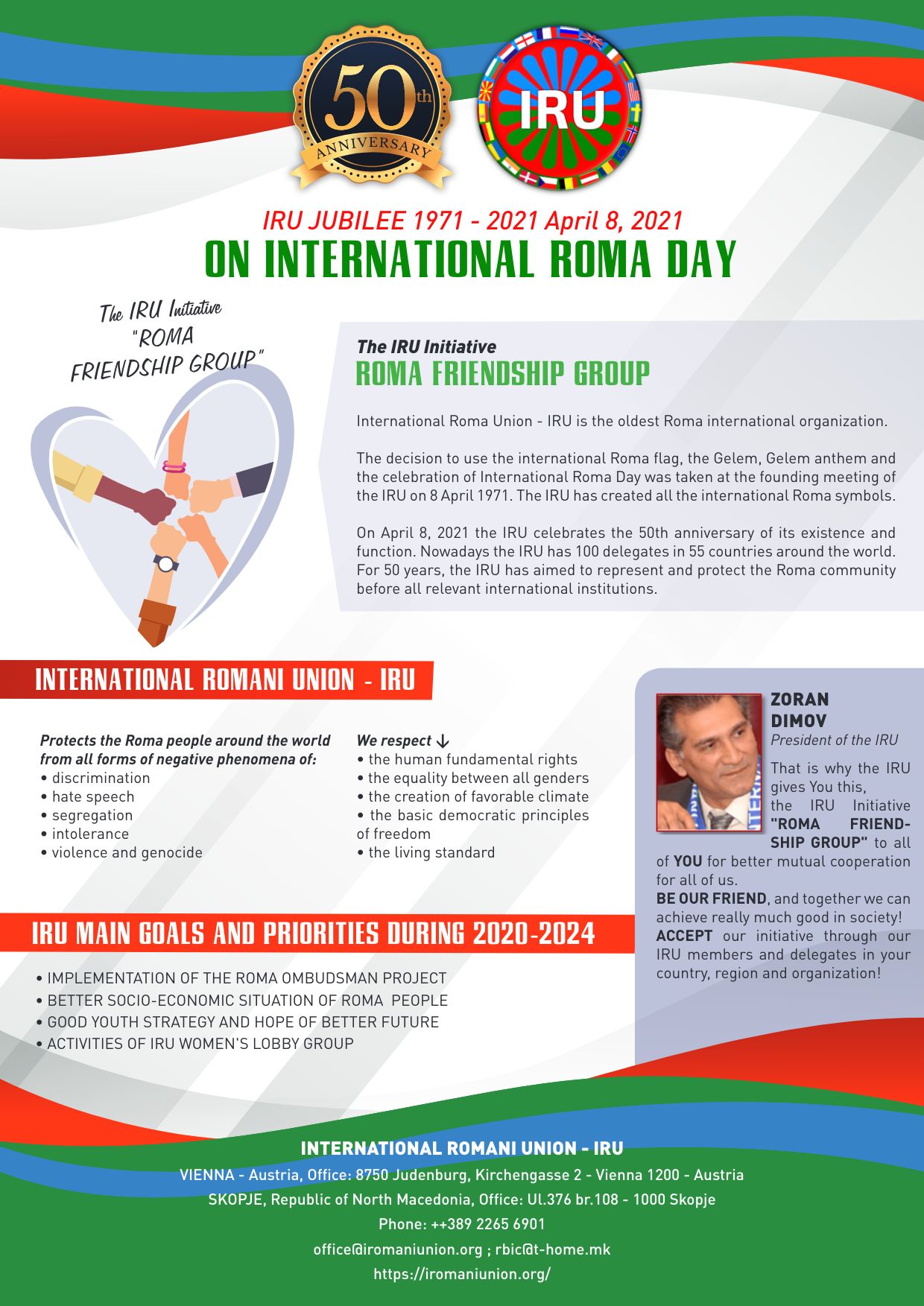 As part of its planned activities, the IRU launches its campaign entitled The IRU Initiative ROMA FRIENDSHIP GROUP.
These are part of the IRU activities for this year as well as further strengthening its representative role within the international institutions. At the same time, this Initiative will be sent to all local, regional and national relevant state factors and organizations, to deepen the cooperation of the IRU with them at all possible levels.
The campaign itself states, among other things: International Roma Union - IRU is the oldest Roma international organization. The decision to use the international Roma flag, the Gelem, Gelem anthem and the celebration of International Roma Day was taken at the founding meeting of the IRU on 8 April 1971. The IRU has created all the international Roma symbols. On April 8, 2021 the IRU celebrates the 50th anniversary of its existence and function. Nowadays the IRU has 100 delegates in 55 countries around the world. For 50 years, the IRU has aimed to represent and protect the Roma community before all relevant international institutions.
Protects the Roma people around the world from all forms of negative phenomena of: ∙ discrimination ∙ hate speech ∙ segregation ∙ intolerance ∙ violence and genocide
We respect ∙ the human fundamental rights ∙ the equality between all genders ∙ the creation of favorable climate ∙ the basic democratic principles of freedom ∙ the living standard
IRU MAIN GOALS AND PRIORITIES DURING 2020-2024
∙ IMPLEMENTATION OF THE ROMA OMBUDSMAN PROJECT ∙ BETTER SOCIO-ECONOMIC SITUATION OF ROMA PEOPLE ∙ GOOD YOUTH STRATEGY AND HOPE OF BETTER FUTURE ∙ ACTIVITIES OF IRU WOMEN'S LOBBY GROUP 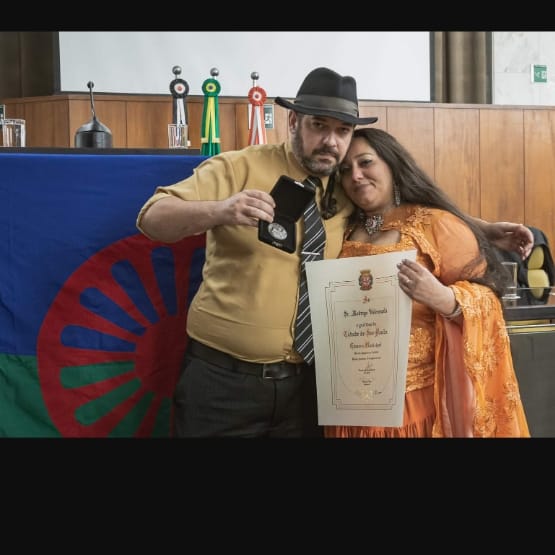 In the letter itself, the President of the IRU Zoran Dimov says:
Thank you organizers for giving me a chance to share some words with all of you. It is such an honor for me to be part of this event, where we cherish our hard work through the years.

The IRU is the only global Roma organization. We are representatives of all Roma people. At this moment the IRU already has special IRU delegates in 55 countries. In the IRU organization the term "Roma" also includes Sinti/Manush, Calé, Kaale, Romanichals, Boyash/Rudari, Travellers, Yenish, “Gens du voyage”, as well as other groups and all persons who identify themselves as Roma. The IRU protects global cultural rights, Roma identity and valuable traditions of Roma. We are proud that the rich Roma culture is well known and appreciated.

Prior to Covid-19 pandemic, the Roma have been informal Roma entrepreneurs and livelihoods have been based on the informal economy, such as street vendors, informal recyclers, day laborers, musicians and other artists. The Roma have tried to maintain their modest standard of living under overwhelming economic pressure, without a minimum income, and have tried to act despite the risk of Covid-19 infection.

But in times like this we can see who was there for the people in need. In times like this we can finally tell that the hard work has paid off. These people, Valenzuela Family, Jovanka and Rodrigo Valenzuela have done so much for our culture and because of that we are proud, and Sao Paulo is also proud. I am so happy that today we are celebrating culture, history and rituals to our people, that we are together united as one, because that’s the way we can achieve our goals. This is an amazing opportunity to unite everybody and with this party we create job opportunities, publicizing projects that includes cultural awareness, dancing, cooking and crafting workshops, and many more so we can grow together stronger.

Thank you for your support the city of São Paulo and selfless help and congratulatons on the prize.
Mr. Zoran Dimov, President of the International Roma Union - IRU 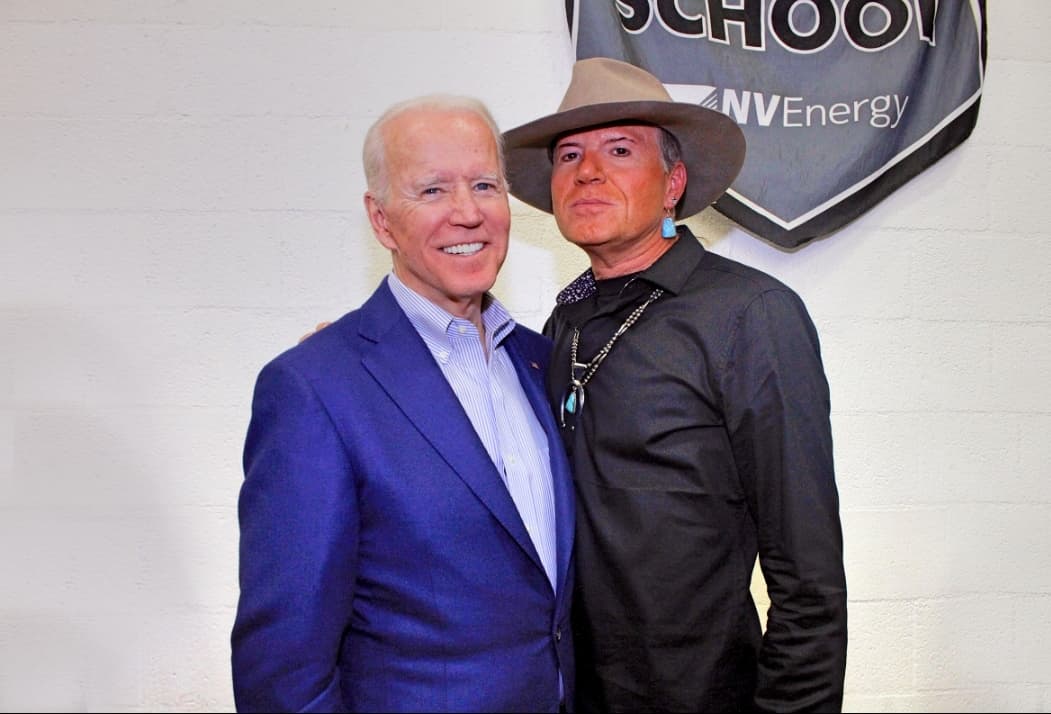 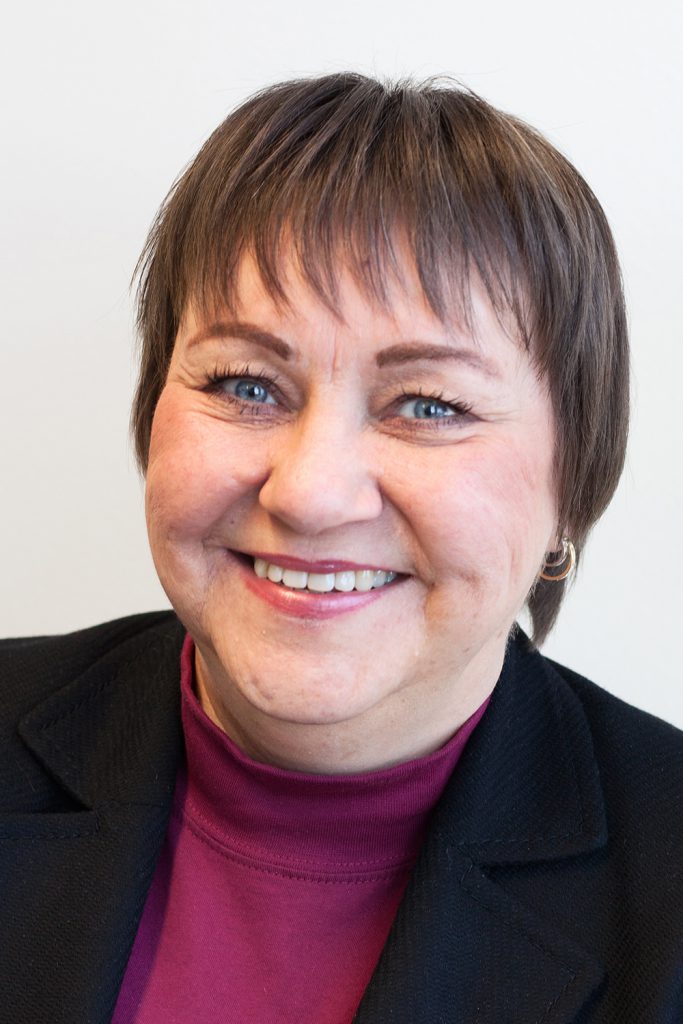 In his letter, Mr. Dimov thanked Finland and especially Helsinki for their meritorious work for the benefit of the Roma. The situation of the Roma in Finland is one of the best in the world globally, but there is still room for improvement, especially at the attitude level, as the Equality Ombudsman's annual report 2019 shows. For years, the City of Helsinki and the Helsinki Deaconess Institute have done exemplary work for the benefit of the Roma, a mobile population from Romania and Bulgaria. The City of Helsinki has arranged emergency accommodation during the winter from 1 October to 30 April and acute health care. In addition, during the Covid-19, there has also been emergency accommodation and hot food once a day in the summer of 2020.

In September, Mr. Dimov received acute feedback that a large proportion of Europe's mobile Roma spend the night in Helsinki outdoors in the woods. With the onset of winter, it is needed to quickly get emergency accommodation for the mobile population to continue all year round and also a hot meal every day. President Dimov stated that the City of Helsinki should continue to cooperate with the Deaconess Institute, as they have skilled and experienced employees (the Hirundo project) who are able to help the Roma population on a daily basis.

In his letter, the President of the IRU also stated that the IRU is committed to making efforts and finding ways to improve the socio-economic status of mobile Roma and to activate everyone to participate in education and the wage labor market so that they can earn their own and their families' livelihood.

In her letter, Zoran Dimov stated that Finland, as an EU member state, should contact the origin countries of mobile Roma (Bulgaria and Romania) and direct them to allocate the funds they receive from the EU budget for Roma integration to reduce the number of mobile Roma, also Finland. The IRU is involved in supporting Roma integration.

President Dimov expressed the hope that the City of Helsinki would quickly provide emergency accommodation for mobile Roma throughout the year.

The City of Helsinki's answer

The City of Helsinki's reply letter came quickly at the beginning of October. The letter stated that the city will continue its cooperation
with the Helsinki Deaconess Institute also in this matter of the mobile Roma population, and the city recognizes the know-how of the Deaconess Institute's Hirundo project.

Answer from the Finnish Ministry for Foreign Affairs

Yesterday, October 23, IRU President Zoran Dimov received a reply letter from the Finnish Ministry for Foreign Affairs. The letter states that the issue raised by the IRU is very important and topical, and the City of Helsinki is responsible for the emergency accommodation of the mobile population in Helsinki, and the IRU has sent the letter to the right party.

The Ministry of Foreign Affairs states that it promotes the status of the Roma and related human rights issues in various multilateral contexts, e.g. In the EU, the Council of Europe and the UN, and bilaterally with Bulgaria and Romania. The Finnish Embassies in Bulgaria and Romania also promote, on various multilateral contacts, raising awareness of the rights of Roma communities and the importance of integration in co-operation with the authorities and NGO Actors in these countries. The Ministry of Foreign Affairs Promises to continue this work.

The Finnish Ministry for Foreign Affairs thanks the IRU

At the end of his reply, the Finnish Ministry of Foreign Affairs thanks the IRU for the important work that the IRU is doing to promote the status of the Roma minority in the long and short term. 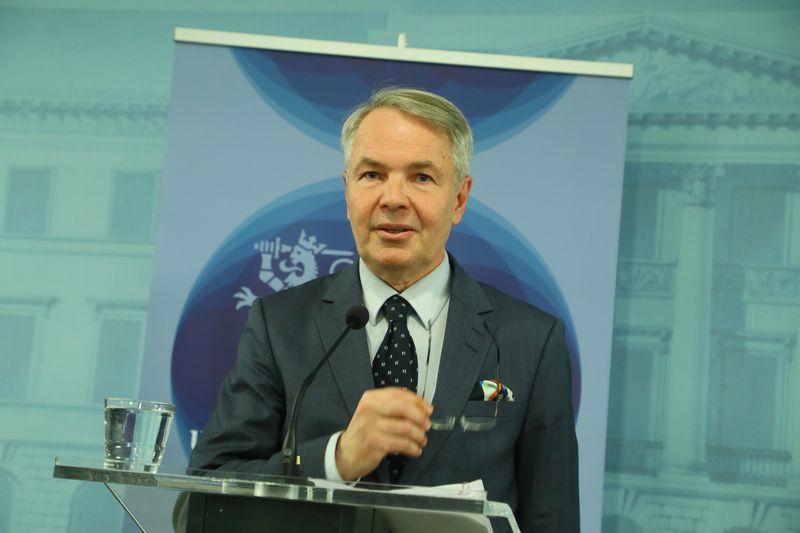 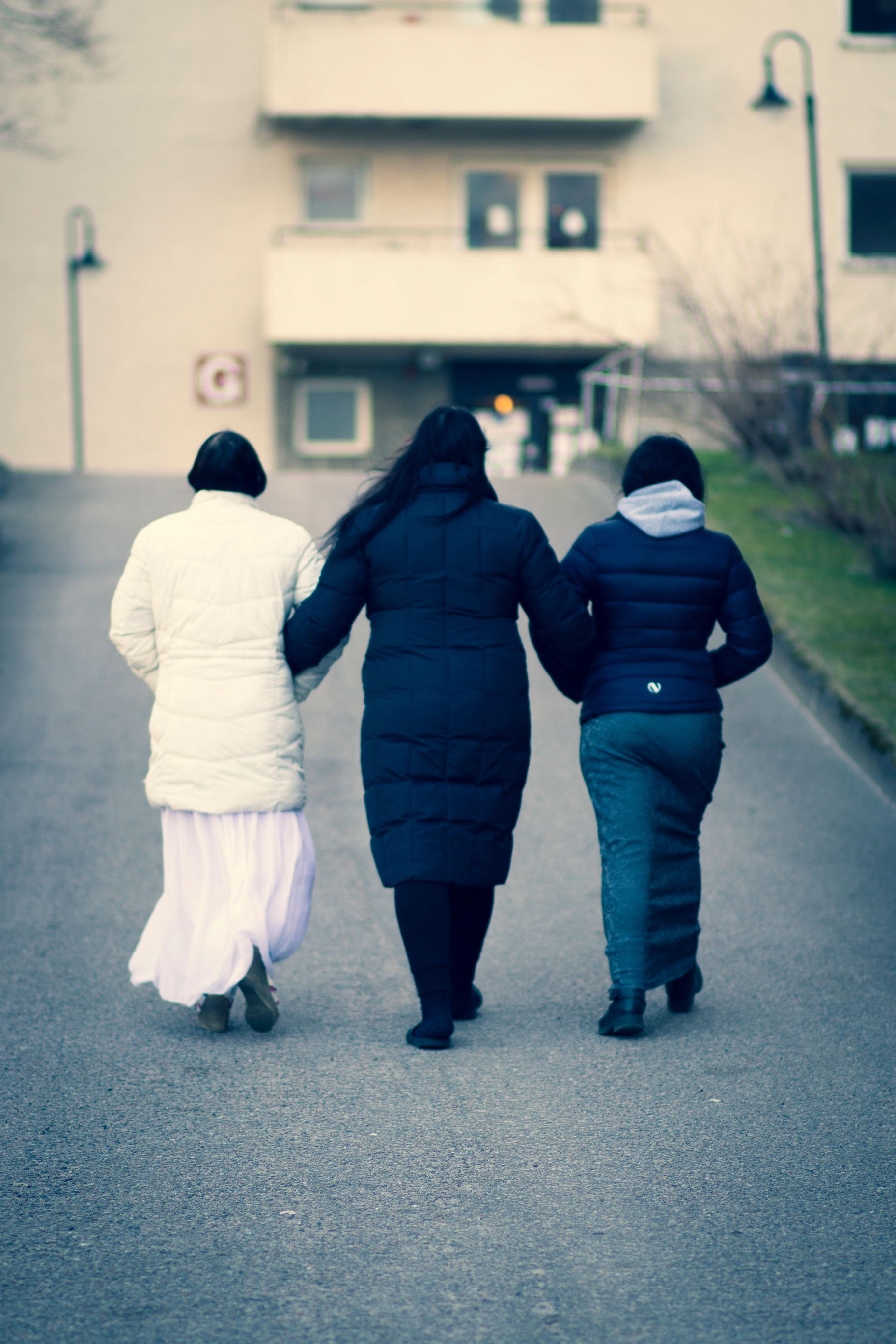 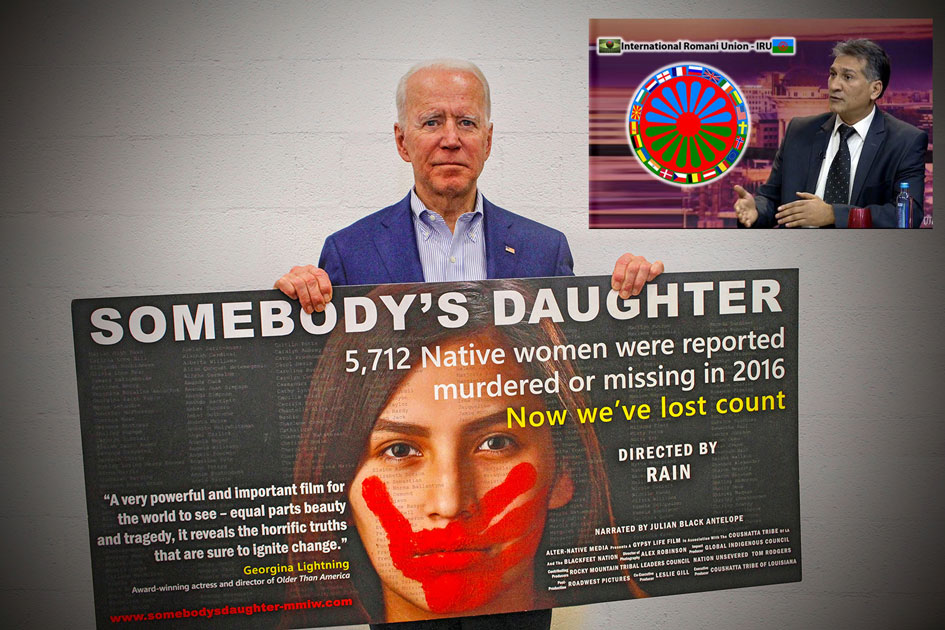 We have 241 visitors watching ROMATIMES.NEWS